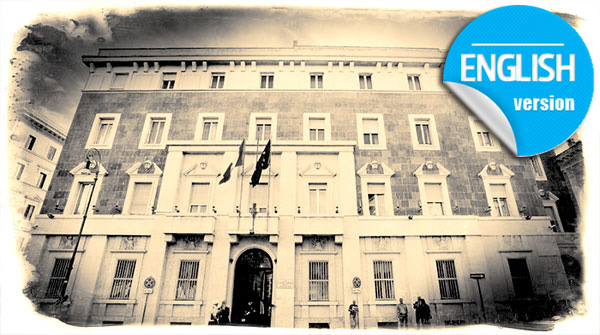 By Giorgio Bongiovanni and Lorenzo Baldo - March 3rd 2015
Superior Council of Magistrates rejects Nino Di Matteo’s  approach to the National Anti-mafia Directorate
We have probably written all there is to be written. Perhaps our persistent intent in addressing the “high exponents” of institutions for obvious matters may seem redundant. However, it is not a secret to anyone that resignation in human beings represents a last resort. Actually, it is exactly what we are trying to avoid. The Superior Council of Magistrate’s refusal to accept judge Nino Di Matteo’s candidacy for a position in the National Anti-mafia Directorate comments itself. Anger, bitterness, disappointment, this is what honest citizens are feeling. Citizens that saw in Di Matteo’s appointment a clear answer, an answer that said the State was by his side, by the side of Italy’s most exposed magistrate. More than once have we described members of the Superior Council of Magistrates as “masqueraders” driven by political logics which are light years away from the principles of justice. Recently we invoked the new President of the Republic, Sergio Mattarella, asking him to watch over the Organ of self-governance of magistrates that he directs, hoping for a sign of solidarity toward the man whom has been sentenced to death by Cosa Nostra. What more can we add? Should we note the effects of a decision that clearly proves the reluctance of the State to be close to Nino Di Matteo?

“Death is a consequence of isolation”, said Giovanni Falcone. His isolation did not come from civil society, it came from institutions. Over the past years, between disciplinary measures, the emission of peculiar documents and missed nominations, the Superior Council of Magistrates has been very busy. It reminds one of the days when Falcone and Borsellino were still alive. The 91.000 signatures collected in a little more than twenty days last year to ask the Superior Council of Magistrates to appoint Di Matteo district attorney of Palermo were and are of no relevance. In the meantime the risk of an attempt at the magistrate’s life has grown. After having revealed the presence of one-hundred-fifty kilos of TNT, informer, Vito Galatolo imparts the hazard of an attempt to be carried out by means of a high precision rifle. A detail that cannot be ignored. If the petition promoted by Salvatore Borsellino and our editorial staff was intended as a request to support investigations which are being conducted by magistrates involved in the mafia-State inquiry, this time, the message could have been even more distinct. A tangible expression of solidarity on behalf of the State toward a man whom is withstanding a death sentence delivered by Totò Riina and by a “criminal system” who is merely waiting for the right moment to fulfill the extreme penalty. We shall never cease to ask institutions to intervene in order to save our magistrate’s life. In contempt of the deafening silence coming from the “high authorities” of the State each and every one of us is morally obliged to act as opposition is exposing the slaughter taking place with the complicity of a good part of the “caste” of magistrates, politics and mass media. For future memory.